Electrical Incidents in the Media

However it should be noted that the official figures are likely to be substantially higher as not all incidents are reported. Of note is the absence of clippings relating to electrical shocks, which are much less visible than fire incidents and so remain underreported.

So far this year the number of recorded incidents from January to mid-June is 243 – or approximately 40 per calendar month on average.

Breakdown of most common appliance fires from news clippings:

White goods totalled 173 incidents over this period – 71% of all recorded incidents. This is not unexpected as these products are typically either constantly left on, as in the case of fridge freezers, or receive a much higher level of usage than other appliances. 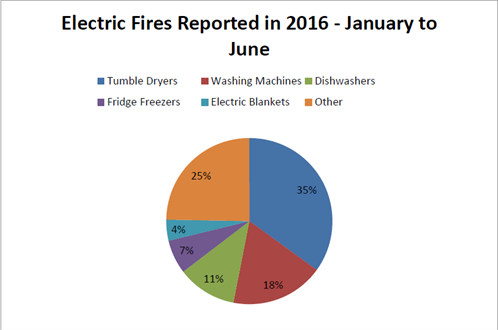