In October 2017, Electrical Safety First attended a live testing event at the BRE facilities in Watford, to examine the fire resistance of different backing materials for fridge freezers. The event was organized by Fire Investigations UK and attended by industry experts and authorities.

Fridge freezer backing materials can either feed the spread of fire or contain it depending on their composition and installation. The testing was intended to demonstrate the performance of different materials from Beko branded products and other brands.

The test involved applying a free-burning flame (produced from a propane gas cartridge gun with the air holes restricted at the gun nozzle to enable a soft under-ventilated yellow low velocity diffusion flame) to the rear of the appliance for 5 minutes in different locations to deliberately attempt to create a sustained fire. This was to simulate an external fire attack on the rear of the appliances from, for example, a kitchen waste bin, a failed compressor component or an adjacent appliance.

Two Beko fridge freezers were tested, one with a metal backing and the other with a bonded foil backing.  It was noted that some plastic components ignited, such as the drip tray and plastic drain pipe, but subsequently self-extinguished after a few minutes and did not spread to the rear covering of the appliances.  The tests showed that a free-burning flame was not sustained within either appliance during these tests. 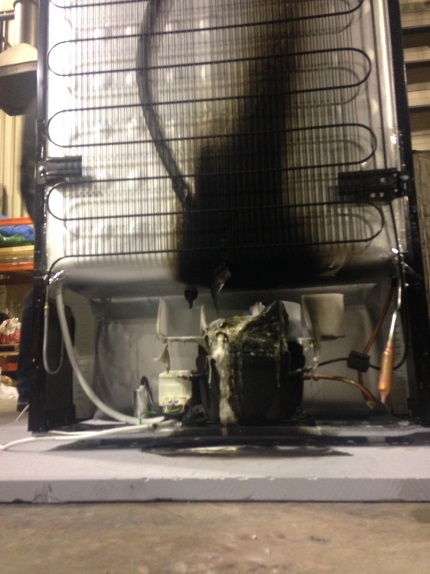 Two fridge freezers from other brands were also tested, one backed with plastic (appliance A) and the other with non-bonded foil (appliance B) marketed as ‘fire resistant’. When submitted to significantly less onerous testing, with a flame applied for only 30 seconds, these appliances sustained and allowed the spread of intense fires. For appliance A, the fire involved the complete back of the fridge-freezer within three minutes and continued to involve the whole appliance. The fire was extinguished by the test team after 30 minutes.  For appliance B, the fire sustained its growth up the rear panel spreading to and involving the whole appliance within seven minutes, when the gas pipe ruptured adding to the fire. The fire was extinguished by the test team after 35 minutes. 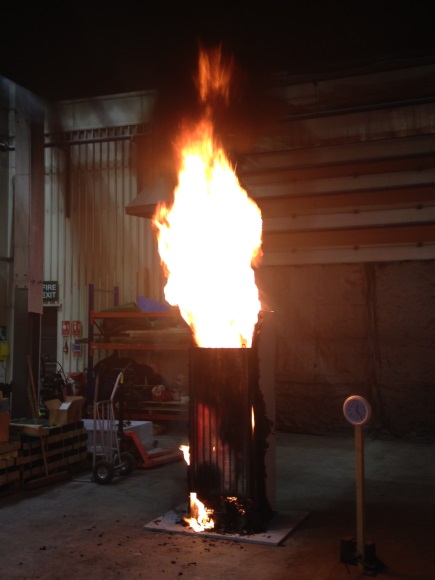 The two appliances that ignited and sustained rapid fire growth had backing constructed with materials deemed acceptable by the current product safety standard.

Current UK concerns are specifically that the backing materials of household refrigerating appliances can be made from highly flammable material which if ignited can lead to a serious fire. The ferocity of the fire being such that the heat and products of combustion (toxic smoke) given off are sufficient that an average two story three bedroom house would likely be unable to support life within 3 minutes of a fire occurring. This provides very little time for consumers to react, particularly if they are asleep. EN 60335-2-24 – the standard that sets out particular requirements for refrigerating appliances, ice-cream appliances and ice makers - needs to be revised to address this longstanding issue.  In recognition of this, reference to the standard remains unlisted as a ‘Harmonised Standard’ in the Official Journal of the European Union.  Therefore, manufacturers cannot use the standard alone to provide a presumption of conformity with the safety objectives of the Electrical Equipment (Safety) Regulations 2016.

Electrical Safety First are advocating that the data from this investigation to be used as further evidence to highlight this serious safety issue and to drive forward the standardisation process to better protect consumers.

To help make white goods safer, Electrical Safety First has been working with the London Fire Brigade to develop a new ‘voluntary mark’ to be used by manufacturers of fridges and freezers to demonstrate that the backing has been made from fire-resistant materials tested to an agreed test criteria.  Refrigerators with flammable plastic backs are a serious safety concern and can cause large, rapidly developing fires.