Electrical Safety First investigated a number of commercially available UK socket-outlets incorporating USB ports, as a repeat of its investigation conducted in 2014. This was done for two reasons – to see if the quality and safety of the products had improved, particularly in light of the arrival of larger manufacturers onto the market, and to see if the products are capable of meeting the recently introduced standard requirements regarding socket-outlets incorporating USB charging points.

As part of a comprehensive revision of the BS 1363 series of standards, Part 2 - Specification for 13 A switched and unswitched socket-outlets published in August 2016 now includes in its scope Socket-outlets incorporating electronic components, including USB circuits intended for charging portable devices.  A new annex in the standard sets out the conformity criteria for USB circuits - referencing existing component standards - and further specifies particular requirements to deal with the safety of incorporated components into socket-outlets.

While the previous edition of BS 1363-2:1995+A4:2012 remains current until its withdrawal in August 2019, manufacturers are encouraged to use the revised 2016 edition with immediate effect to ensure their products remain state of the art and constructed in accordance with principles of good engineering practice.

As with the 2014 study, the primary safety concern is that such products could pose a risk of electric shock or fire if the extra-low-voltage parts of the USB power supply are not sufficiently segregated and separated from the low voltage (240V) parts of the product or from the fixed wiring installation of the property in which the product is installed. As previously stated, socket-outlets incorporating USB ports are now covered within the scope of BS 1363 Part 2, but it is recognised that the new USB requirements were in draft form at the time of this investigation and by and large unknown to many manufacturers.  However, the samples selected for screening were all readily available on the consumer market, and as such, would need to meet the essential safety requirements of the Electrical Equipment (Safety) Regulations, primarily by conformity to applicable and current safety standards.

For this exercise, nine different products from different manufacturers were chosen, ranging from a completely unbranded socket outlet to well-known industry leaders. 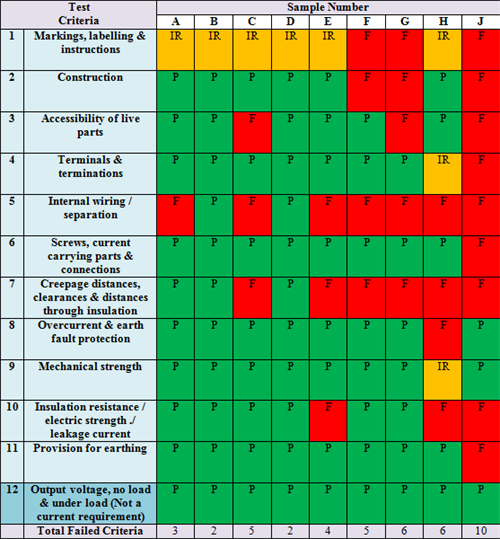 Of the socket outlets tested, the unbranded socket outlet (J) performed the worst, only passing three of the 12 criteria. Many of the branded products failed to meet all the test criteria in our screening, including the new markings requirements.

The best performing sockets were samples B and D, which are products from major manufacturers.

Overall, the results are concerning with three of the sockets tested failing due to accessible live parts, and 7 (77%) of the sockets failing due to inadequate internal wiring and insufficient separation, with some samples failing on this count due to the use of solder alone for both mechanical and electrical connection, and one sample (the most expensive) failing due to completely inadequate separation between the mains input and USB output – just 1.74mm against a required 4mm.

Visual inspection of the purchased products revealed that this was the most common failing, with none of the products meeting the criteria adequately in terms of existing and the new requirements.  However, six of the products only partially met the requirements as some of the required markings were not visible once installed correctly. 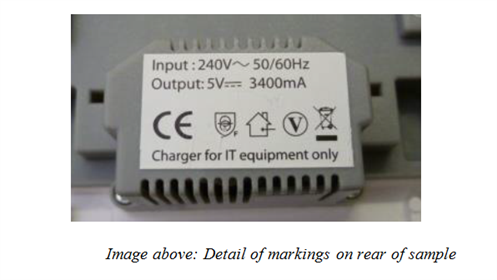 Three products failed this criteria, with two on the grounds of failing to meet the required dimensions for the pin apertures. Sample J, however, was found to have poor construction throughout, to the extent that the product did not allow sufficient space for the required fixed wiring, potentially making the product impossible to install safely. 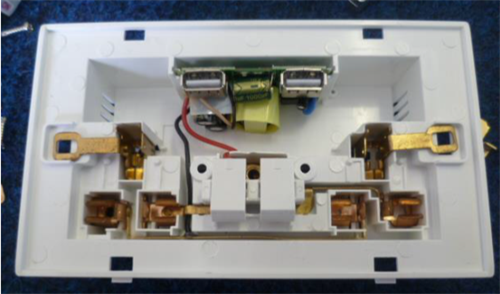 Three of the products failed this criterion with live internal parts being contactable through one or other of the socket outlet apertures with the specified test probes, with sample J being found to have accessible live parts on both of the double sockets.

The overall worst performer, sample J, was the only product to fail this criteria outright, due to poor design obstructing the earth terminal fastening. Sample H is recorded as a partial failure as during operation the terminals distorted.

Seven of the samples failed this criterion, with only samples B and D passing. The most common failures were the reliance on solder only for mechanical and electrical connection and breaches of the isolation barrier. Sample J was again one of the worst example, with basically insulated secondary wiring being in direct contact with the capacitor cases in the primary circuit, and the primary capacitor was so poorly positioned that it could make direct contact with a USB output connector.

Only sample J failed this criteria, reflecting the overall poor quality of this product, with the design relying on the plastic enclosure for maintaining contact pressure.

As electronic circuits rely upon insulation and/or physical separation to prevent the risk of electric shock, excess heat and/or fire, the laboratory checked that the components, including the transformer and the conductive tracks of the PCB, complied with the safety requirements set out in the product standards. Six of the samples failed this test, on the same grounds of failure found when testing the internal wiring and separation distances.

Overcurrent and earth fault protection in primary circuits (Clause 1.3.2, Annex I of BS1363-2)

Only one product failed this criteria, sample H, as the protection in place did not appear to operate during testing, leading to the external surface of the product reaching a recorded temperature of 80°C, exceeding the maximum permitted temperature rise of 52°K.

All samples passed, with one recorded as “improvement recommended” as the casing had cracked during a previous test, making a full mechanical strength test impossible.

Samples E, H and J failed this criteria, whereby an electric strength test was carried out between the Line and Neutral terminals and the output of the USB circuit, which is required to have double or reinforced insulation. In all three cases a flashover occurred after 1 second at levels between 2600 and 2900V, which indicated a breakdown of the insulation.

All samples passed this test.

As is clear from the results of this limited investigation and its predecessor, several safety risks and other non-compliances are present in socket outlets incorporating USB power supplies. In particular it should be noted that based on the selected samples this was not limited to unbranded or the lower price end of the market.

A key point of the results, however, is that many of the issues identified are basic failings with the “conventional” areas of the socket, rather than limited to the USB port(s), which is of significant concern.

As with all our previous product safety investigations, the findings of our research will be shared with the manufacturers and suppliers concerned to make them aware of the nature and extent of the electrical safety failures we have identified.

Where deemed appropriate, our findings will also be shared with Trading Standards to assist them with their market surveillance activities and enforcement duties.

The laboratory test reports (redacted) will be made available to view in full in the ‘Electrical professionals’ section of our website in due course.